More on the State Budget; Meydenbauer Bay Park is Open; City Boards and Commissions Need You 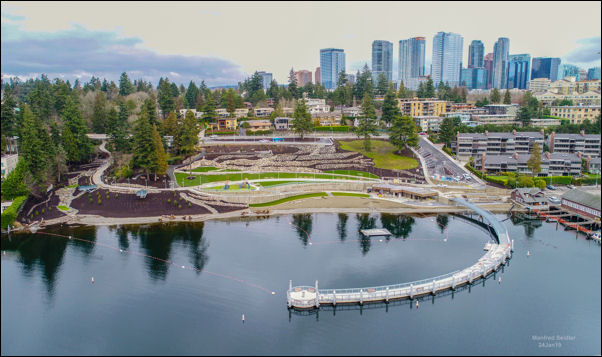 Back in January, Governor Inslee proposed a $54.6 billion budget for the coming biennium, with $3.5 billion in new spending. Now the House has adopted a $52.6 billion budget and the Senate has come in at $52.2 billion.

By comparison, a maintenance budget, meaning continuation of existing spending levels for the next two years, including our K-12 obligations under McCleary v. State, would hit the $51.0 billion mark.

How would the legislature propose to pay for a couple billion more in spending?

The House also proposes a B&O tax increase on a variety of services from 1.5% to 1.8%, with large technology companies seeing an increase from 2.0 to 2.5%, to pay for a revamped College Promise scholarship program and career connected learning.

The Senate budget assumes 8.9% tax on capital gains profits above $250,000 per household and the REET proposals is as follows:

With $5.6 billion more to spend in the coming biennium, then legislators had when they wrote the current budget, many in the business community are questioning the need for $1.4 billion in proposed tax increases.

Next time we’ll look at how the money would be spent. In the meantime, let us know what you think.

Many Chamber members and their families were present on Saturday, March 16 for the Grand Opening Ceremony for Meydenbauer Bay Park. The enhanced and expanded park now offers seven acres and a quarter mile of public access waterfront in the heart of Old Bellevue.

Longtime residents know that a century ago, Meydenbauer Bay was the winter home to a fleet of whaling ships, and offered auto ferry service aboard the Leschi, across Lake Washington from 1914 – 1950.

Congratulations to several generations of Bellevue elected officials and staff for the 32 years of planning, funding and property acquisition necessary to make Meydenbauer Bay Park a reality.

Note: This editor can’t wait to for the annual Christmas Ships Festival to visit Meydenbauer Bay again this December.

City Boards and Commissions Need You

Here’s another chance for aspiring civic leaders to serve on one of the City’s boards and commissions. The Bellevue City Council will soon consider appointments to the Arts, Environmental Services, Human Services, Planning and Transportation commissions, as well as the Library Board.

Many current and former councilmembers got their start in public life by serving on an advisory body. Whether you see yourself as a future candidate for public office or simply wish to give back to the community, learn more at the Boards and Commissions Recruitment webpage.